he restoration and birth of Boone’s Colonial Inn began on December 2, 2005 when Steve and Venetia were asked if they would be interested in purchasing the two buildings. Karen and Rich House who own the Country House retail shop at 903 South Main had inherited the buildings from Pop and Mom House. It was Karen and Rich’s wish that the buildings, which had been in their family for over thirty years, be sold to someone who would preserve their character and use them in a manner which would complement historic South Main Street. Steve and Venetia immediately said yes and the restoration officially began with an appraisal. The buildings were formally acquired in August of 2006. The initial restoration began with removing florescent lighting in the ceilings… actually 26 florescent lights. Some of the wiring was upgraded, floors cleaned and the area was landscaped. Venetia sat down and looked through countless books and magazines she had acquired over the years, some from her mother and others from traveling in Europe. 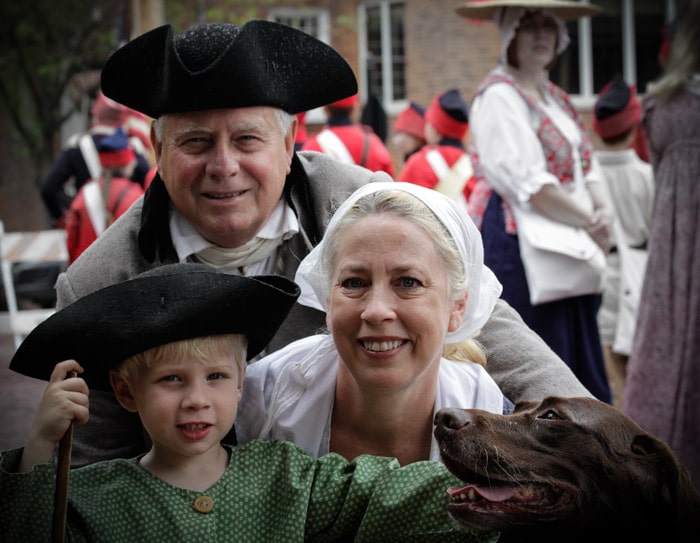 New lighting fixtures, colonial style paint and furnishings brought a new, but colonial look to the rooms. We opened the buildings for retail, private catered dinners and special events within two months of acquisition. The next year and a half was spent hosting catered events while securing architectural plans, historic tax credit approval, local historic landmark approval and of course, funding. With permit in hand Steve, and Venetia and their families, spent the months of May and June, 2008, removing drywall, ceilings, floor coverings, fixtures, etc. in order to prepare the building for reconstruction. On July 25, 2008, we began construction of the actual inn with Jim Droste of Droste and Sons construction company. Jim is well known in St. Charles for his work on historic structures. The goal was to create a colonial environment and inviting guest rooms in order to achieve maximum aesthetics and personal space/amenities within the historic characteristics of the rooms.

The room walls were first framed up, air jetted tubs set in place, plumbing installed, then electricity, the sprinkler system and finally the drywall and floor restoration. In order to achieve the water flow needed to service the sprinkler system, we had to dig up the entire street in front of the stone building in order to install a 1″ water pipe and then tie together the two water supplies in each building. You will find historic details throughout the buildings from stone walls to mortise joints to hand hewed log joists to original flooring. Wherever possible, these details were exposed. The construction company finished their work in December of 2008. Steve and Venetia took over with the interior finishing work and the floor restoration was complete.

The Boone’s Colonial Inn opened, officially, on December 31, 2008 after an expenditure of $650,000 and nine months of construction and over 400 hours of work by Steve and Venetia. We thank Jim Droste for his patience and commitment to historic preservation. We thank Harry Knollhoff and Rick Pfaff our electricians who really anticipated every electrical need. We will miss Harry’s constant whistling of the oldies but goodies. Steve Burke our lead carpenter was the best. He was always there to do what we needed on the Inn and always understood the need to adhere to historic preservation standards and yet try to keep us in budget. Victor with Reliable Fire Systems, we say thank you for working with us to make the Inn safe and the systems as non intrusive as possible. Bob our plumber with Boland Plumbing, we say thank you for your patience and for working with us on creative solutions and explaining again and again how the Willy Wonka Chocolate factory actually works. Dana and Tom Hartman, two of our other dear friends who helped us with the marketing details. Dana Hartman, who owns Hartman Design, spent countless hours designing and redesigning our website and marketing materials and still does to this day. And, yes, Dana it is your inn too. To Dan and Karen Satterfield for helping us when the chips were down and for designing and hanging our sign. And our countless other friends and family who gave in spirit and labor to make this a premier lodging facility on Main Street. Finally, to my parents, Paul and V’Anne Mydler, a loving thank you for your constant “never give up” attitude and your love for all things historic and preserving one of the first historic buildings in the South Main Historic District. Their dedication to what is now Boone’s Lick Trail Inn(c.1843) and saving it from demolition by purchasing off the city auction block is what true perservance is and the finest example parents can show their children. If you do what is right and work hard, good things will follow.

We hope you enjoy our boutique inn and the attention to detail in order to build a historically accurate property. It is truly a labor of love for the buildings and the South Main Historic District.

Reservations
Call for Reservations and availability or book online directly on our secure site. Best rates are direct with us.
Book direct and save.
Call 636-493-1077 or Text 314-575-2925